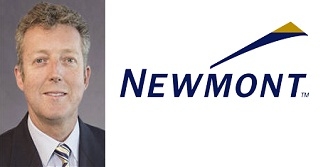 Mr. Woodley succeeds Tom Kerr who retired from Newmont after 32 years of distinguished service to the Company.“Andrew is an accomplished operations and business leader with more than 20 years’ experience driving improvements in safety, productivity and sustainability,” said Tom Palmer, Executive Vice President and Chief Operating Officer.

“His broad leadership experience delivering step-change improvements in mining, minerals processing and project development make him the right leader to build on our North Americaregion’s strong performance, and to deliver our strategy – which is to improve the underlying business, strengthen the portfolio and create value for shareholders and other stakeholders.”

Andrew joins Newmont having served as President and Chief Executive Officer of Rio Tinto’s Oyu Tolgoi copper and gold mining operations inMongolia. Prior to Oyu Tolgoi, Andrew was Managing Director for Rio Tinto Coal Mozambique and Country Head for Rio Tinto in Mozambique. He has held the role of General Manager of Operations at mines in Australia, and has worked in exploration in Canada, as well as management consulting in mining, and manufacturing in Australia, New Zealand, Malaysia and the United States. Andrew earned his Mining Engineering degree from the University of New South Wales, Australia and an MBA from Wilfrid Laurier University in Canada.

Newmont is the largest US-based gold producer where it operates surface and underground mines in Nevada and Colorado. Last year Newmont marked 50 years of operations in Nevada and the North America region accounted for nearly one-third of Newmont’s global production and 44 percent of the company’s gold reserves. This year Newmont completed, on time and on budget, the Turf Vent Shaft that allows for new, profitable gold production from the Leeville underground mine in Nevada and announced expansion of Exodus. The Company also expects to begin gold production from Long Canyon in the first quarter of 2017.

About Newmont
Newmont is a leading gold and copper producer. The Company’s operations are primarily in the United States, Australia, Ghana, Peru, Indonesiaand Suriname. Newmont is the only gold producer listed in the S&P 500 Index and was named the mining industry leader by the Dow Jones Sustainability World Index in 2015 and 2016. The Company is an industry leader in value creation, supported by its leading technical, environmental, social and safety performance. Newmont was founded in 1921 and has been publicly traded since 1925.