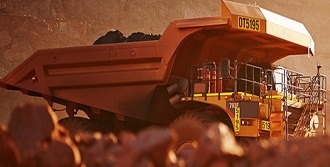 Mr Muller, a former employee, developed a single process flow sheet to mine and process one of the largest, most complex mineral deposits in the world.

In recognising his achievement, BHP Billiton Chief Technology Officer Diane Jurgens said she was delighted to present to Mr Muller the inaugural CTO Award that recognises outstanding contribution in the field of technology and innovation.

“Mr Muller’s process proved that economic benefit could be derived from Olympic Dam and other similar deposit styles. The process flow sheet he created had never been done before. It was a creative and unique application of metallurgical technologies and allowed the Company to produce all four products at the one mine site,” she said.

“This is an example of how technology can create value by unlocking resources and lowering costs.“Importantly, Mr Muller’s work opened up opportunities for mining of other similar complex ore bodies.”Discovered in 1975, Olympic Dam is the first discovery of an iron oxide-copper-gold-uranium orebody and the largest uranium, fifth-largest copper and third-largest gold deposit in the world.The Technology and Innovation Award recognises contribution to technology across BHP Billiton.