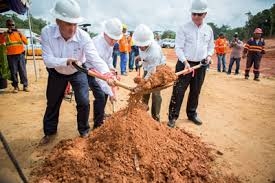 Fortescue celebrated 8 years since its first commercial shipment of iron ore from Herb Elliott Port in Hedland to Shanghai Baosteel,marking significant milestone in Fortescue’s long-term relationship with its Chinese customers.

“In eight years Fortescue has shipped over 680 million tonnes of quality iron ore to our valued Chinese customers, as well as those in Japan, Korea and India. We are supporting China’s rapid development and industrialisation, while also taking an active part in the establishment of Australia’s most important trading relationships with China and across the region.”

“The recent release of China’s 13th Five Year Plan and our involvement in the 2016 Boao Forum has reinforced the huge potential for further economic cooperation between China and Australia, and we are very pleased that Fortescue can continue to play a role as that potential comes to fruition.”

Baosteel Co Ltd President, Mr Dai Zhihao congratulated Fortescue on its achievement and acknowledged the valuable and close-working relationship between the two companies.

“First of all, we warmly congratulate Fortescue on the eighth anniversary of their first shipment to China and we are grateful for Fortescue’s support and assistance to Baosteel since 2008! We wish Fortescue continued success as their China business flourishes and scales new heights,” Mr Dai said.

Mr Power commended the efforts of the Fortescue team as the company continues its journey to become the world’s safest, lowest cost, most profitable iron ore producer.

“A great deal has been achieved by the Fortescue team in eight short years, guided by our strong culture and values, and I am very excited about the further opportunities that lie ahead,” Mr Power said.